Legends have been used for centuries to explain the mysteries of nature, such as how birds and flowers got their colors, and why the robin's breast is red. Some legends are far fetched and amusing, others warm and tender.  I've always been fascinated by imagination interwoven through out stories and legends, particularly those that highlight plants and animals. I hope you'll enjoy them and I would be delighted to of hear others if you are inclined to share!

Gifts from the Rainbow
How Birds got their Colors 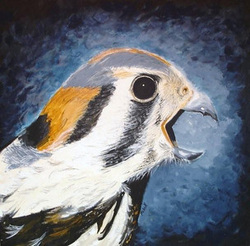 An African American legend explains that at the beginning of time a torrential rain fell on the earth.  When it ended, the world was gifted with a glorious rainbow.  No one had ever seen such brilliant colors!

The birds were the first to see it and the flew swiftly to get closer, joyfully flying in and out of the brilliant, iridescent arch!  As they passed through the colors, their feathers were painted the gorgeous colors of the rainbow!

Other birds, such as the kestral, flew through several different colors.  This caused stripes and spots of colors to form on his beautiful feathers!  The swift and exuberant hummingbird flew merrily in and out of every color, causing him to have his own iridescent rainbow, delightfully visible when the sun catches his feathers.

Imagine!!!! Two of our most delightful treasures, color and birds, working in harmony to create beauty that we see every day if we just stop to notice!!!

Gifts from the Rainbow
How Flowers got their Colors 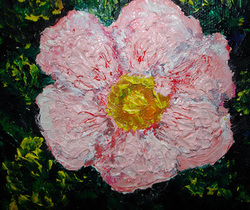 The angels saw the birds flying through the rainbow (ok, I made this part up - they are two entirely different legends but I think they are both more delightful when combined).  Actually, this story is from Spain, so it is unlikely that they are related.  Well, it was until now!

So, as the story goes, after the drenching rain, the angels saw the rainbow and flew over to explore!  They were charmed by the glorious colors and they called all of their friends all over the universe to join them!!!!!

More angels came, some from so far away that their wings became tired and they needed to rest on the fragile rainbow.  More and more angels gathered.  The weight of all of the angels caused the rainbow to break! It was shattered into a million pieces!!!!  But don't worry!!!! It was yet another miracle - we are surrounded by miracles - did I ever mention that?

Anyway, the fragments of glorious color fell to the earth!  The droplets drifted all over the world!!!!  They settled on bushes, trees, in the grass, and on the herbs.  A glorious abundance of color majestically decorated the earth! These colors became our beloved flowers - delicate pink wild roses, golden daffodils, the regal red tulip, the majestic purple iris, scarlet roses, the delicate violet, the gentle blue borage, pink cherry blossoms, and the gold and orange marigolds!!!!  Look around!  Enjoy!!!  Join me and let's sing to the universe - Thank you angels!!!!

Some legends are far fetched and amusing, others warm and tender.  I've always been fascinated by imagination interwoven through out stories and legends, particularly those that highlight plants and animals. I'm beginning with legends related to the Christmas holiday and plan to expand over time. I would be delighted to of hear others if you are inclined to share.

One recurring theme in Christian legends is that certain plants bloom on Christ's birthday! Another is that the animals in a  manger all bow at midnight on Christmas Eve.  I snuck out to my grandmother's barn in Indiana one night when I was in grade school, and waited . . . and waited  . . .  and waited to see all of the animals bough in unison. Granted, it wasn't a manger but is was as close as I could find! And the time zone was probably off . . . and once you factor in day light savings time . . . then there was the frustration that the animals were already sleeping . . . It was disappointing and I finally gave up and went inside at the risk of running into Santa, another legend that I believed with all my heart!  I have no idea how I missed the arrival and departure of all of those reindeer and that jolly old elf, but there was proof of their visit under the tree on Christmas morning.  It was my first and last attempt at seeing the animals bow.  Maybe I shouldn't give up so easily!

There are several legends and variations about the 'first' Christmas tree. One legend states that the very first fir tree was abundant with blossoms and fruits until Eve came along and picked them.  I will spare you my commentary on Eve getting blamed for EVERYTHING and just get on with the legend!!! After Eve so inappropriately partook of the gifts of the Tree of Life, it grew only prickly, inedible needles until the birth of the Christ child, when it bloomed once in profusion once again!

The Other First Fir Tree
I know this is confusing. Humor me?

Sir Boniface and the First Fir Tree
And one more!

Saint Boniface, an English monk from the eight century, who is credited for organizing the Christian church in Germany and France, is credited with the creation of the 'Tree of Life'. He heroically thwarted an attempt to sacrifice a child to the god Thor and in doing so, the first fir tree was sprung from the ground.

In his travels to spread the word of Christ, Saint Boniface came upon a group of pagans surrounding a huge oak tree.  The pagans were preparing to sacrifice the child when the monk interrupted and felled the mighty oak with his fist in one blow!  The oak tree was believed to be invincible and this powerful act is thought to be an attempt to convince the pagans to convert to Christianity. His mighty swing was so powerful that the tree split into quarters and in the center, a small fir tree sprung up in its place. The Saint declared that the tiny fir tree was the Tree of Life and stood for the eternal life of Christ. 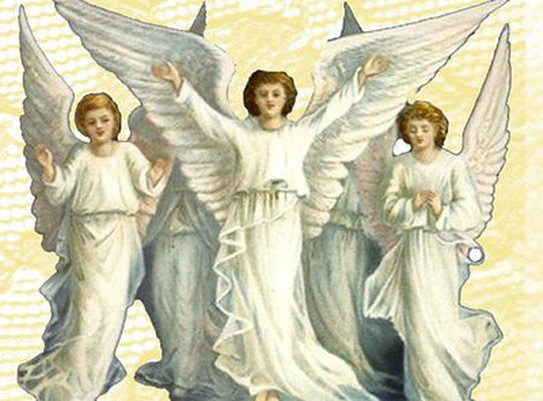 When Christianity arrived in northern Europe and the legend of the Christmas tree became known, three angels,
Faith, Hope and Charity were sent from the heavens to find the perfect tree!

The perfect tree was to be as

Great as Faith
High as Hope
Sweet as Charity

It was also to have a cross on every bough. 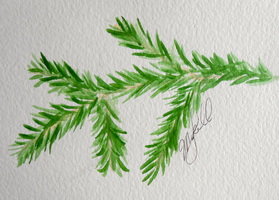 The search ended when they found the fir tree.
They lighted it with stars and it became the first Christmas Tree.

The Hawthorn - The Blessing of the Thorn 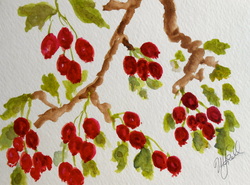 Joseph of Arimathaea carried a staff made from the hawthorn to Glastonbury, Somerset, England when he journeyed there to share his ministry of Christianity to the ancient Britons.  He arrived at Wearyall Hill, exhausted from his long journey, and thrust the hawthorn staff into the ground.  The tree took root, grew leaves and is said to blossom twice annually, in the spring and again in the winter on the birthday of Christ.

The famous Abbey of Glastonbury was built next to the famous Glastonbury Thorn, and pilgrims traveled there for years to seek the blessing of the thorn.  The original tree has been propagated several times by grafting. Sadly, the original tree was burned during the English Civill War. It was replaced in 2010 but its trees were cut off. Cuttings from the tree have been grafted since ancient times and one was taken to the National Cathedral in Washington, D. C. where it is currently growing in the Bishop's Garden.